Clinging to Hope During My Son’s Battle with Addiction

Clinging to Hope During My Son’s Battle with Addiction 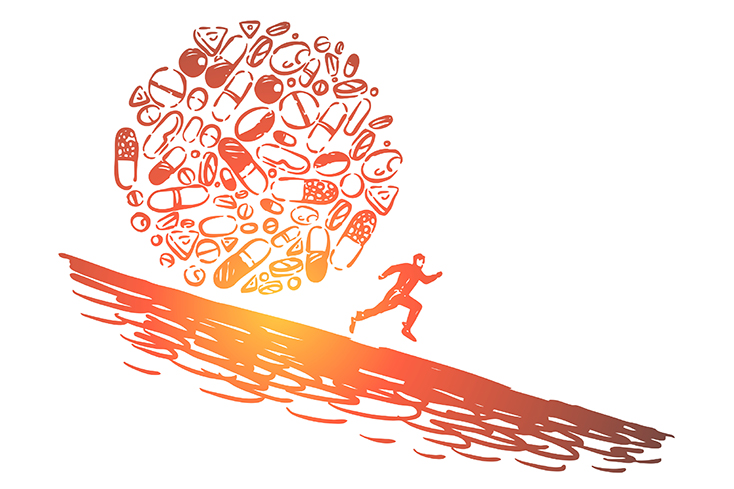 On the top shelf of my closet is a shoebox wrapped in striped, metallic wrapping paper. What’s inside are pieces of notebook paper written to my son, Michael, when he was going through addiction. These notes not only have words of encouragement on them, but were also an exercise for me in letting go and having faith, something I clung to during the worst times of his addiction.

I grew up in the 80s. There were D.A.R.E programs in our schools and “Just say no to drugs” campaigns. I also grew up with a father who battled alcoholism. I knew all about what that looked like. But none of that prepared me for my son’s addiction.

In 2014, when Michael was beginning his sophomore year of high school, our world began unraveling. He was struggling in school, had uncontrollable anger and wasn’t making the best choices or hanging out with the best group of kids. He came to me and said he thought he had ADD. My response? “Work harder.” My thoughts up until this point was ADD was over diagnosed and a crutch for parents who were too preoccupied to discipline their children. I was wrong.

It was also during this time that I found marijuana in my son’s room. I was shocked. Sure, I smoked as a teenager, but my son? No way! I’ll never forget that day. I confronted him after he got out of the shower about the dried leaves all over his desk. “What’s this?” I asked. “It’s marijuana,” he responded. I couldn’t believe he was telling the truth. He was 14 years old and wasn’t scared of anything.

That day, I made a bargain with Michael, “If you promise you won’t do it again, I won’t tell your dad.” To which he responded, “I won’t do it anymore.” I was 35 years old, a single mom and didn’t know what I was doing. In hindsight, I should have called his dad right away. I knew it was wrong, but I kept telling myself Michael was just experimenting and it was normal teenage behavior.

The next year is a bit of a blur to me. There was lying, cheating, stealing, cutting and drug use. I’ll never forget the day Michael told me he didn’t want to live anymore. We were sitting on my bed and tears streamed down my face. He was 15 years old. I told him we would get him help and I didn’t know what it was like living in his body. That evening, I called his dad and told him I was afraid Michael was going to do something to hurt himself.

A week later, following a confrontation with Michael at his dad’s house, we were driving home and again he told me he wanted to kill himself because he knew he let his father and I down. I immediately pulled the car over and saw the pain in my son’s eyes. We sat in the parking lot of a local pizza place and he cried, and I promised him everything would be okay. I have found in my years as a mother, blind faith is better than no faith. I didn’t know for sure everything was going to be okay, and I was scared as hell, but I leaned in and said it anyway.

Soon after, we admitted Michael to an inpatient facility. He was there for a week, and we visited every other day. He was completely withdrawn.

I learned something about our health care system during this time. We do not have the appropriate resources needed to help teens fight drug addiction and depression. Most of the doctors wanted to prescribe medication to fight his depression that was caused by addiction, which was caused by self-medicating for ADD and depression initially. It’s a vicious cycle.

We were lucky enough to find two psychologists who were dedicated to treating our son and officially diagnosed him with ADD. They were instrumental in helping us realize Michael needed a combination of medication and talk therapy to work through the problems he was facing. I truly believe this is what saved his life.

Following his hospitalization, Michael went to live with his father and attend a new school. That was the hardest, but best decision, of my life. That kid was my world, but I knew I could no longer provide for him the way his father could. I felt like a failure, but I also knew he needed to be with his dad.

It was during this time that I started the shoebox. It contained encouraging notes dedicated to Michael. His sister and I would write, “We love you and miss you. You are strong. You got this.” It was also therapeutic for us as we were sad about not having him around.

Nowadays, every time I run across that shoebox, I read the notes to remind myself life isn’t meant to be easy. Sometimes when you’re going through a difficult time, it’s hard to think about hope for the future. I would never imagined how well things turned out for Michael, who is now the most level-headed young man you’ll ever meet. Sure, he still has his battles, but he is strong, and he is a fighter. We don’t talk a lot about those high school years anymore. These days we’re focused on the future.

Sometimes, there is no way to prepare for what life throws at you, but if you ask for help and stay the course, there is always hope.

Kristy M., MBA, is a single mother of two, a writer and a marketing professional.