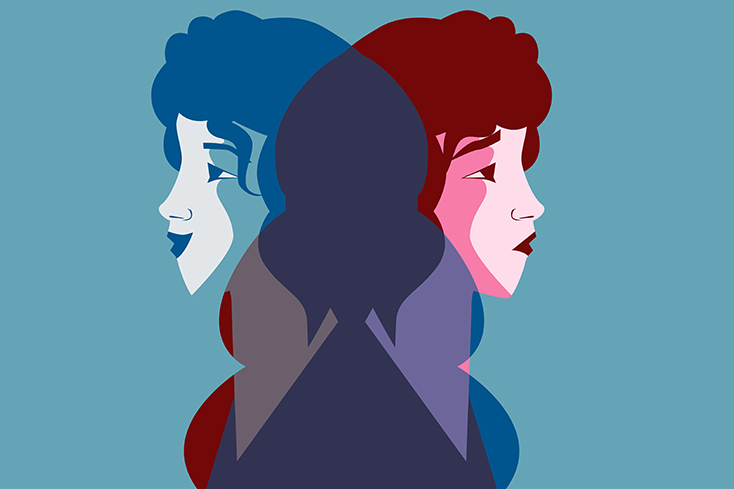 Like 1 in 5 American adults, I live with mental illness. My diagnosis, however, is less common. Due to early and severe childhood maltreatment, my personality fragmented, resulting in episodes of dissociation and the emergence of alternate personalities, or “alters.” In other words, I have dissociative identity disorder (DID).

Thanks to dramatized media depictions of DID, simply hearing the name of my condition may conjure images of brokenness, violence and terror.

It’s no secret that Hollywood has capitalized on a widespread fascination with DID in the last decade. Multiple films, and even a television series, have used DID as a plot device for murder and chaos. This tactic has been effective. “The United States of Tara,” a TV series chronicling the journey of a suburban wife and mother living with DID, drew in an average of 2.67 million viewers per week in its first four episodes. The 2016 thriller “Split,” a movie following a violent predator with 24 personalities, raked in over $278 million in the box office.

But do these platforms represent DID accurately? In my experience, media depictions of the condition are both inaccurate and harmful.

It’s Hard To Get The Right Diagnosis

Mental health providers, like the general public, are inundated with dramatized media depictions of the condition. When they see unhinged and aggressive characters with DID — or even “harmless” individuals who transition seamlessly between personalities — they may develop expectations of how DID will present in a potential patient.

The reality of the condition, however, will look different. In “The United States of Tara,” the protagonist switches between alters often, and her alters are easily recognized by (and open with) her family. In many individuals with DID, however, switches between personality traits are more subtle and other people may not notice a change.

This only worsens how difficult it is to receive an accurate diagnosis of DID. The process can take years or even a decade, as symptoms may be more subtle — and certainly more complex — than practitioners may assume. I consider myself one of the “lucky ones” to have received a diagnosis right away.

People Assume We Are Violent

When I was a child, I experienced trauma at the hands of my caregivers; as a result, my mind did not develop typically. Simply put, the stress hormones that flooded my young body readying me for the fight-or-flight response never had a chance to return to baseline levels, so my brain was forced to compensate by compartmentalizing the atrocities I experienced.

While I no longer identify as a victim of my childhood maltreatment — I identify as a survivor — I am certainly not a perpetrator either. The message we receive from movie depictions of DID, however, suggests that I am someone to be feared.

In the movie “Split,” a person living with a DID diagnosis imprisons, kills and eats three women. He even has an alter named “The Beast” that commits a variety of violent crimes.

By contrast, I never have, nor will I ever, harm another person purposefully. I am not dangerous in the least. I’m simply a human being whose brain protected me so that I could survive.

Stigma And Misinformation Is Rampant

Movies like “Split” and their dramatized versions of mental illness breed misinformation and shape an unhealthy discourse. People have asked me if it’s “fun” having DID, and some have even wondered aloud if they could develop the condition as an adult for their own entertainment. Such questions are not only inappropriate, but also deeply distressing or triggering.

In addition to films misrepresenting common presentations of the condition, they also inspire a fear of DID and the people who live with it.

A complete stranger once told me (without knowing I have DID) that he hoped he never “ran in to someone like that,” as he would be “terrified” of a person living with DID.

I have even lost contact with two houses of faith because the leadership discovered I have DID. After all, movies tell church leaders that I am possessed by the devil and must be exorcised for my own good.

As a result, I fear telling anyone I do not know well about my diagnosis. I keep my medical information private to avoid undue judgment and resulting isolation.

Until Hollywood makes strides in consulting experts and honoring those with lived experiences, we cannot simply accept media portrayals of mental health conditions as factual. Sensationalizing complex diagnoses offers a limited and inaccurate version of our lived experiences.

Despite Hollywood’s role in perpetuating stigma, individuals have the power to change the narrative surrounding DID. We can start by pointing out misrepresentations in a television show or refusing to consume content that portrays individuals with DID as broken or violent. We can call out misinformation in casual conversation and direct our peers to resources with facts and even accounts of personal experience.

As I continue to live my life in a way that looks nothing like Hollywood’s characterization of DID, I will spread accurate information about my disorder. My life is evidence that people living with DID are just resilient people managing a chronic condition.

Shirley J. Davis is a published author specializing in writing about dissociative identity disorder. She also owns and operates the internationally known and award-winning blog, “Dissociative Identity Disorder in a Nutshell,” available at www.learnaboutdid.com