How I Talk About Mental Health with My Kids

Home-Blog-How I Talk About Mental Health with My Kids

How I Talk About Mental Health with My Kids 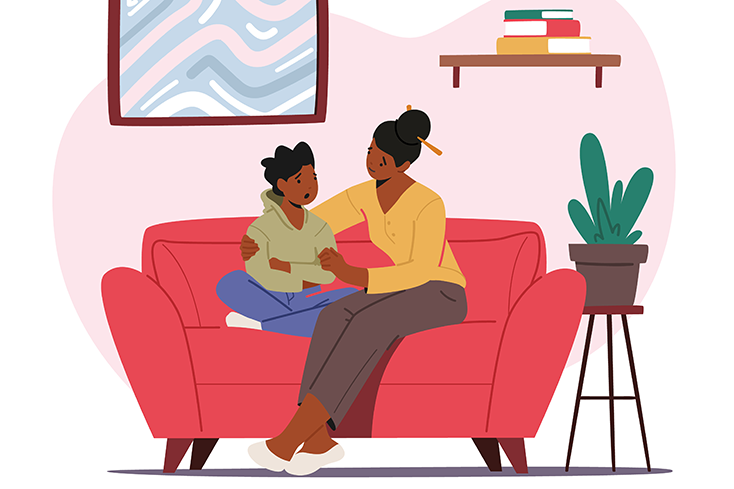 Mental health — and mental illness specifically — can be very difficult to understand and navigate for anyone, but especially for children. Children, more so than adults, have difficulty processing emotions and psychological changes. As a result, they often exhibit behavioral challenges when they don’t fully understand their emotional state. I noticed this with my own children; when my kids were younger, they would get frustrated and throw tantrums because they couldn’t articulate their feelings.

I often think back to my childhood and my experience with mental illness. When I was younger, I would experience panic attacks and depressive episodes. But back then, I didn’t know what they were. I assumed they were simply a part of life, and I carried on like everything was ok. As a result, I wasn’t properly diagnosed with a mental health condition until I was well into my twenties.

I didn’t want my kids to have the same experience of confusion and uncertainty, so I took it upon myself to have open conversations about mental health with them. Here are some of the things I did to make the topic more accessible.

I Helped Them Label And Understand Their Emotions

One of the things I found most beneficial when discussing mental health with my family was to help my kids label what they were feeling. The Georgetown University Center for Child and Human Development recommends making or drawing facial expressions for young children and asking them to guess what emotion you’re trying to portray. This allows children to visualize and explore complex emotions in an accessible way. This is an especially helpful activity to do with younger children who don’t yet have the vocabulary to articulate their emotions. During interactive play with my children, we incorporate these types of exchanges to help them become more familiar with emotions.

While discussing mental health with young children is an intimidating task, finding ways to demonstrate, label and unpack specific feelings sets them up to find better coping mechanisms and strategies.

I Tried To Be A Role Model

As many parents know, children often learn by imitating the people around them. I first noticed this when my son began repeating some of the words I would say. He would copy the way his dad reacts when watching sports. This kind of behavior was cute. However, I also noticed that when he was sad, he would try to hide in a corner, far away from everyone else. When he was scared, he would let his emotions take over him instead of coming to us for help.

I eventually realized that my son was mirroring our behavior. When I had panic attacks, I would often “ride out the wave” instead of practicing grounding techniques. If I had a depressive episode, I would shut everyone out and “deal with it” on my own. Amy Morin, psychotherapist and author of “13 Things Mentally Strong People Don’t Do,” notes that the habits we cannot break often hold us from true success and happiness. Indulging in self-pity, for instance, can hold us back. While I knew this in theory, seeing my son do the same things opened my eyes to the fact that I had to take better care of myself to show him how he can navigate difficult emotions.

From then on, I paid close attention to my own behavior and developed coping mechanisms. I found that watching comfort movies helped when I was in a bad state and being around people I love made me feel more at ease when I was anxious. Slowly but surely, my son started to cope in these ways as well. Now, both my children come to us when they are struggling. By caring for myself, I have taught my children to prioritize self-care and asking for help.

I Cultivated A Safe Space

Mental health can be an unfamiliar or sensitive topic, even for young children. Often, this discomfort keeps children from expressing their feelings or asking for help. I found that cultivating a safe space at home, as advised by UNICEF, helped my children feel like they were free to express their emotions and feel heard without judgment. Moreover, this foundation will help them to grow up with fewer doubts about seeking help for their mental health. I always try my best to listen and validate what my kids are feeling by listening, accepting and offering advice if they ask for it.

A safe space can also include check-ins to establish trust and communication. I would take my son out for a drive (so he would feel safe doing a familiar activity), and we would talk about what problems he was facing that week. Even when there weren’t any, he felt heard and understood, and I had reassurance that he was ok.

With my younger daughter, I took her to parks where she would tell me about her day while I pushed her on the swings. This made the interaction feel more casual and inviting, which encouraged her to share more. However, it is important that when you are attempting this with your kids, you should not push boundaries or force them to speak when they are uncomfortable. Cultivating a safe space means there is no pressure.

As the mental health conversation evolves, it’s time for more people to get comfortable with (and diligent about) addressing this topic with their kids. Judith Warner, journalist and bestselling author of “And Then They Stopped Talking to Me: Making Sense of Middle School,” points out that most modern parents are increasingly aware of mental health issues because they grew up with other people talking about them, which lessened the stigma surrounding mental health and helped promote interventions.

These conversations are essential for our children’s health and eventually, the direction of societal attitudes about mental health. By taking an open, proactive and empathetic approach, I have been able to teach my children how to recognize and handle emotions, but also how to feel confident addressing mental health head-on.

Alicia Maddox is a mental health advocate who is working toward a graduate degree in psychology. She is also passionate about literature and uses her free time to catch up on new releases while facilitating discussions in her mini book club.