Battling Mental Health Symptoms and the Consequences of Stigma

Home-Blog-Battling Mental Health Symptoms and the Consequences of Stigma

Battling Mental Health Symptoms and the Consequences of Stigma 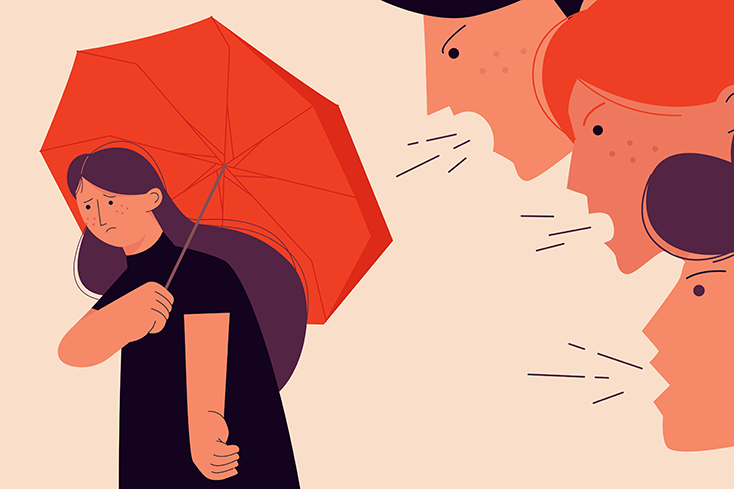 For most of my life, I have battled depression and mania. There were weeks on end when I could not get out of bed. I would scold myself for not being whatever it was I needed to be that day: a better mother or a better wife. I would also spend weeks or months as an upbeat, fearless, spunky, funny and driven woman — a woman who could command the attention of the room with confidence. There was rarely a middle ground.

When these symptoms began, I did not have a specific diagnosis, but I did know something was wrong; a fact, I thought, I was never going to admit to anyone. I had a nice group of friends, and I was afraid of losing them with the news of my mental illness.

Despite my insistence on keeping my condition private, I knew just how serious the consequences of mental illness could be. In 2005, my father-in-law was diagnosed with bipolar disorder, stopped taking his medication and ultimately, died by suicide. But I knew I could never take my own life; it would be cruel to allow my husband to lose both a father and a wife to the same fate. I loved him too much to do that to him.

In fact, I was angry at my father-in-law when he died. I did not understand why he would choose to leave his family — or why he would create such chaos in his family’s lives. Due to my own internalization of misinformation and sigma surrounding mental illness, I could not empathize with his pain or see his struggles as a result of illness and isolation rather than bad choices.

Experiencing My Own Mental Health Crisis

After I was diagnosed with bipolar disorder and my symptoms escalated, I began to understand my father-in-law’s struggle. He had once described himself as a “shell of a person” — something I had not understood at the time. I never imagined I would know first-hand what that felt like, being a “shell,” but I did, 16 years later. In the summer 2021, I was faced with the same alienation and fear of this illness, dealing with it nearly alone, and wholly misunderstood.

By the end of June, my symptoms reached the point where I lost touch with reality. My memory of these manic and psychotic episodes is patchy; I know that I did things, but it was as if I was not in control of the reins. Other than short flashes of memory, everything is blank. My behavior, I learned later, included filing an undeserved Protection from Abuse on my husband. Naturally, this caused traumatic upheaval in my family life.

My children were deeply upset by my actions, but I did not see any concerning changes in behavior. Even when I saw creatures crawling out of the walls and “zapping” me, I called no one. I would see my children in the house, even though they had chosen to stay with their father.  I’d feel them hugging me and turn to hug them back. Each time, I was reduced to tears because they were not actually there.

During this time, I was full of paranoia, fear and anger, and I was filled to the brim with confusion, trying to make sense of reality in complete isolation. The police eventually found me sobbing on my front lawn, screaming that my kids had been kidnapped (by that point I’d spent weeks without them and had no idea that I was the cause of it). The episode culminated with a two-and-a-half-week stay in a psychiatric hospital and months in group outpatient counseling.

Dealing With The Aftermath And The Accompanying Stigma

After my mental health crisis, I faced several challenges. Of course, I had to grapple with the reality of my manic behaviors, but I also had to weather the loss of people who could not accept that I had an illness.

Perhaps the most devastating loss was Melanie, my best friend of 30 years. She was angry with me and doubted my illness. “You are hiding behind this bipolar lie,” she wrote to me. Then, after being shut out by Melanie, I lost all my friends overnight. As I tried to make sense of this loss, I began to understand the isolation my father-in-law must have felt and the ridicule he likely endured from those he trusted.

Now, with the right treatment and medication, I am more emotionally stable. After reflecting on the last year, I have realized something: who I am as a person is not changed by my mental illness. I believe that statement is what we need to start shouting from the rooftops in order to dismantle the stigma of mental illness. A diagnosis (or even a mental health crisis) does not strip us from the good parts of who we are. We are the same people we always were: glorious, fun, driven, intelligent, valuable people.

Anastasia Leiphart has been a freelance writer for nearly 20 years, and her work has appeared in various trade and commercial publications including “Property and Yacht” and “Today’s Modern Teacher.” She now runs a blog called “Razing Rachel,” which tells her story of living with bipolar disorder. Anastasia lives quietly on a Caribbean Island with her husband, three children and three cats.