There is a cavernous gap between the number of children struggling with mental health conditions and the number who actually get help.

That’s one of the conclusions of the Children’s Health Report released recently by the Child Mind Institute.
The report states that nearly 50 percent of youth in the United States will have had a diagnosable mental illness at some point during childhood. Of those diagnosed, 22 percent will have a serious impairment.

Yet, only 7.4 percent of those kids will go to a mental health visit in a year. In other words, many children need help, but they’re not getting it.

“The word ‘crisis’ is spot-on,” said Dr. Harold S. Koplewicz, founder and president of the Child Mind Institute. “The problem is that not only are these kids not getting care now, they’re not getting care tomorrow, or in five years when their symptoms are worse and more complicated. And they’re not getting care when the untreated mental illness of childhood has put them at risk for poor outcomes down the road, like school dropout, incarceration, and even suicide.”

Anxiety Is a Major Factor

Yet, 80 percent of those kids with clinical-level anxiety are not receiving any treatment. Why?

“Anxiety disorders are like a silent majority — kids are very good at hiding them,” explained Koplewicz. “But that doesn’t mean they don’t cause impairment and suffering, and we do know that they lead to more severe disorders down the road. We want to change that, and we can, but the fact is that parents [often] don’t seek help for internalizing disorders like anxiety.” 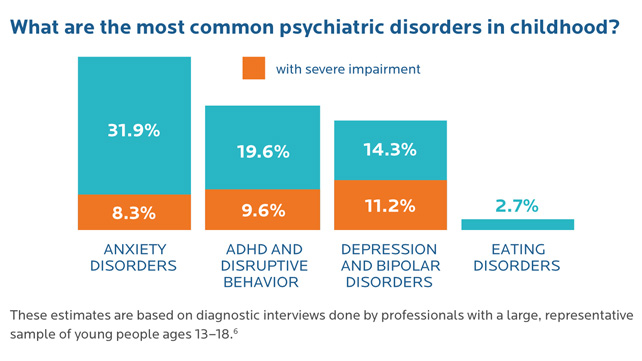 There are many barriers to mental healthcare for families but stigma and misunderstanding are the big ones. Mental health needs are still perceived as something to be ashamed of in the United States.

Parents often don’t want to accept that their child may be different either.

“If parents were knowledgeable and unafraid, then early and routine mental healthcare would be the norm. It would be expected, training would be adequate, and we would not have shortages of providers,” says Koplewicz.

The data show that the median onset for anxiety disorders is 6 years of age. That may be because mental illness and development go hand in hand Koplewicz explained.

“It’s possible that, because fear and anxiety are such fundamental functions of the brain, when developmental processes go ‘off course’ in those areas they manifest early,” he said.

If your child has frequent, drawn-out, intense episodes of fear, stress, or anxiety that seem out of proportion and affects their daily life and happiness, they may have an anxiety disorder. Other symptoms include trouble sleeping or concentrating, irritability, fatigue, and restlessness. 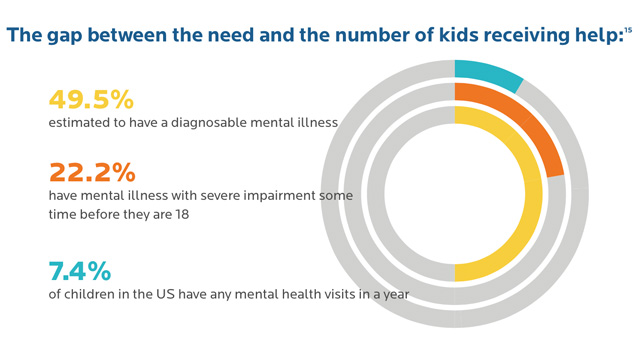 “Anxiety disorders are real, common, and treatable,” said Koplewicz. “Knowledge is your best friend, and fear and shame have no place when it comes to the health of your child, physical or mental.”

The same goes for any mental health concerns, not just anxiety. If you suspect a problem, don’t be afraid to discuss it with your child’s doctor. It boils down to improving your child’s quality of life.

“Kids are amazingly resilient if they have the support and the tools to overcome these challenges — but the dangers are real,” warns Koplewicz.

A self-described “veteran” parent of a son with ADHD, Penny Williams is an award-winning blogger and author of the Amazon best seller, “Boy Without Instructions: Surviving the Learning Curve of Parenting a Child with ADHD.” Her second book, “What to Expect When You’re Not Expecting ADHD,” is now available.

This article was written by Penny Williams for Healthline, the original article can be viewed by clicking here.